It’s Adventure Time folks. Grab your Tags, your going to a very distant land for a two episode journey. You must get the Enchiridion and defeat the Lich in this level pack. Will the fun ever end?

Complete “Painting the Town Black” before starting this level, otherwise, you will get stuck! Also, you must download this level pack (along with all future level and story packs) before beginning gameplay. There are 2 ways to do so from in game:

1. Place the Finn toy tag on the Toy Pad

2. From the Main Menu, go to Options, then choose Download Content. Then scroll down to Adventure Time.

Finn has a weapon switch mechanic allowing him to use different swords, crossbow, and a gauntlet. Abilities will be listed by weapon. To change weapons, hold

or simply use the abilities listed below.

then move in the indicated direction), Acrobat (No double jump, shared with all weapons)

then aim with the left stick)

Crystal Sword: Not obtainable until after the level

Billy’s Gauntlet (Obtained during the level)(Laser)

and the Left Stick, Pole Vault (Use Target to hit a specific area, then jump at the pole. Not used during the level).

Once you are finally ready to start, place Finn on the toy pad and jump into the gateway.

Immediately hit the target above the couch, then destroy the table. Rebuild that into a cup holder and a sword switch. Use the sword switch to open the door and enter the treasure room. Attempt to use the ladder to reveal the objects to destroy. Destroy said objects, then rebuild into a fan. On the top level, hit the radio to get a grapple spot, then swing across to the other side. Climb the ladder, then hit the target and swing across the room. Move the open chest over the edge, then rebuild and use the sword switch, exit the house immediately after.

After a cutscene, head over to Jake to initiate the Jakemobile build.

After finishing the build, objects will begin glowing so smash them up. Rebuild into a ramp, then drive through the level, making sure to destroy all the objects around the picnic near the top and the tires close to the river. Grapple the Dryer, then build a ramp. Now you must save some old ladies.

After these first 3, head right towards the TV, destroy it and radio to build a ramp. Before saving the next 2 ladies, head to the right and in the back, there is a car as demonstrated: 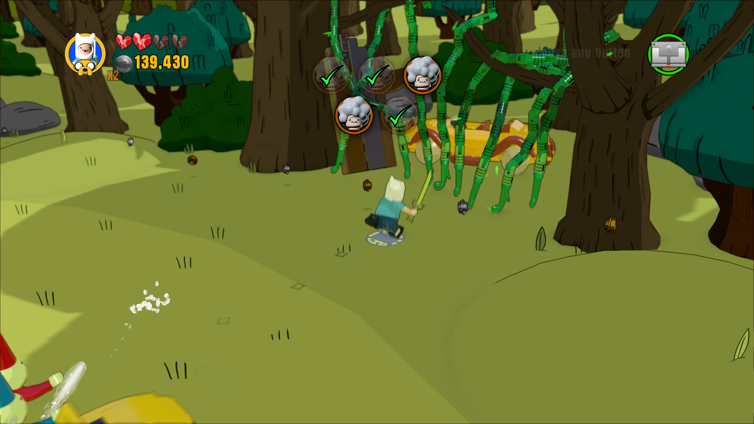 If you cannot find this, there is a second mini kit opportunity later in the level.

Destroy the car for a mini kit.

4. Head back left to find a lady in a tree. Grapple Up and hit the target. Build a trampoline from the debris.

5. Simply shoot the gnomes from midair.

Simply wail at it while dodging its attacks. Careful of the Ice Cream, it slows you down.

Head right and destroy the objects with the skeleton to build a grapple area. Head across and destroy the wood to get a bridge across and a ladder. Head up and destroy the objects and skeletons. Build a sword switch then use it to cross. Destroy the glowing objects to build a path, then head up and push the old lady statue down to the bottom. She’ll give you a ladder. Head back to the sword switch and re use it. Return to the area above and destroy the vines for the Elemental keystone (remember those warnings? If your keystone is transparent, then go complete the main story up to level 5). Use the Grass to grow a plant, then he’d up and build the Ancient Psychic Tandem War Elephant!

Once built, the walls will reveal 2 lasers, destroy both and use the two sword switches. Enter the next room.

Head towards the Evil Guy. He’ll force you to destroy a weird ‘evil’ beast. Dodge its attacks and wait for it to go tired. Wail at it repeatedly until its health is depleted to complete part 1!

Hit the target drapes, then swing across by jumping. Destroy the gold wall and press the button. Remove the debris and build a laser deflect point. Target the Gumboil Guardian then build an Acceleration Switch. Use it to reveal a platform section. Head up and destroy the candy canes for a Shift keystone. Go to purple and destroy the objects to build a switch. Aim the pancakes to the other balcony in the back, then jump on. Once you land, jump on the other pancakes to advance.

2 ways to go through:

Cut the laser to enter the subway and head to the other side. Keep heading right and grapple the debris. Once in this new section, head to the back and destroy the doors to get a sword switch, use it to get a keystone (Reminder: If your keystone is blank, you will be unable to complete the level). Select Locate, then find the rift on the right side of the room. Head down the hole that the Mushroom Bomb made.

Dodge the green laser/shots/shockwaves, destroy the skeletons, then wait for the Lich to drop into the acid. Equip Billy’s Gauntlet, then go to town on it. Before you can defeat it, gravity gets reversed. Now on the ceiling, destroy everything, then rebuild it into a giant fist. Shoot the gold part to clear the level and get an achievement and gold brick.

Rule Breaker is 235,000 studs. If you don’t already have the x2 Red Brick from the LOTR adventure world, grab it. Additionally, the gold brick from this world gives extra studs for defeating multiple enemies in a row so grab it! Once you obtain Rule Breaker, you get the final achievement and gold brick.

Extra Mini Kits obtainable with this level pack (for those who do not have 30 mini kits yet): 1 (With Target and Laser Deflect)

Level 11: In the Basement, shoot down the targets on the head, then enter the secret area and deflect the laser.

13. Mission: Impossible Level Pack
11. Midway Arcade Level Pack
Find anything you think is wrong with this walkthrough? Help us fix it by posting in its Walkthrough Thread.