The impassioned battle over moving the massive but crumbling Alamo Cenotaph is reaching a climax this week that could give new life to the $450 million Alamo overhaul project — or kill it.

The Texas Historical Commission is expected to vote Tuesday on a permit to move the 80-year-old monument a few hundred feet south of its present location.

It’s a debate that has raged for years now.

Leaders of the public-private overhaul plan, which would close Alamo Plaza to traffic, expand pedestrian space and build a new museum, warn that the project is destined to fail if the commission doesn’t approve the permit.

But fierce opponents of the plan, including Lt. Gov. Dan Patrick, believe the Alamo project still could continue if the Cenotaph is repaired in its current location at the north end of the plaza. They have carried signs at demonstrations in the plaza and gathered at meetings shouting, “Not One Inch!”

On ExpressNews.com: As Cenotaph ages, its location becomes subject of debate

The monument features the figures of Alamo defenders and symbolic imagery in a work titled “The Spirit of Sacrifice” by sculptor Pompeo Coppini.

The commission will meet via Zoom videoconference; it’s open to the public. For details, go to thc.texas.gov, click on news & events and click on calendar.

Agency staff has reviewed the permit application filed by the city and its consultants and has found it to be “sufficiently complete, including the process of dismantling and restoring the Cenotaph within a reasonable construction time frame.” 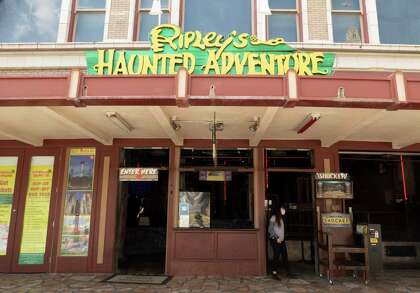 A staff memo offers three options: issue the relocation permit, deny the permit or issue a permit to restore the Cenotaph at its current site.

Officials of the Alamo project, having survived several bills seeking to stop the relocation that stalled last year in the Legislature, won approval for the move in December from the city’s Historic and Design Review Commission as part of a $15 million, city-funded overhaul of the south area of the plaza.

Engineers say the monument is at risk of cracking and breaking apart because of damage caused by rainwater penetration that has corroded aluminum binders in its frame.

Project officials have engaged top-of-the-line consultants to delicately deconstruct, clean and repair the Cenotaph’s marble exterior and rebuild it on a new frame, turning it 180 degrees to face the fort, with new interpretive signs to add some of the Alamo defenders’ names that are omitted or misspelled. 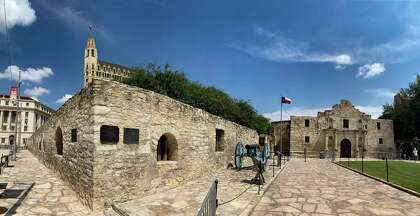 The monument, now in a traffic island, would be illuminated at night in a pedestrian plaza, surrounded by outdoor seating, in front of the Menger Hotel and in direct line of sight of the iconic Alamo church facade.

What: Joint meeting of the commission and Antiquities Advisory Board

But the issue has languished with the historical commission, which considered the matter in January, requesting more information about alternative sites for the Cenotaph.

Little work has occurred since then. Officials of the project, which began with formation of a citizen advisory committee six years ago, have grown restless.

Councilman Roberto Treviño, who leads a six-member management panel guiding the project, has said he’s “disappointed with the place which the Alamo project is currently stalled.”

Failure to relocate the Cenotaph “spells the end of the project,” he said.

Amid the coronavirus pandemic and civil unrest over statues and monuments, the debate over the Cenotaph has shifted to a larger battlefield that puts the entire project at stake. To shore up momentum, the nonprofit Alamo Endowment, with subsidiaries to run the site and raise funds for a museum through agreements with the Texas General Land Office, is calling on Texans, through email blasts and social media, to register their approval at supportthealamoplan.com. 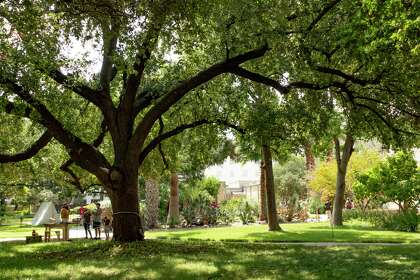 “This project is our moment in history to remember the Alamo,” Alamo CEO Douglass W. McDonald said in an online letter last week. “The Alamo plan will take desperately needed action to repair the Alamo Church and Long Barrack, reclaim the historic battlefield, repair and relocate the Cenotaph, and build a world-class visitor center and museum to help visitors understand the significance of the Alamo as a mission, a fortress and beyond.”

There’s a timeline at stake, too.

British rock star Phil Collins, former Genesis drummer known for hits such as “Easy Lover” and “In the Air Tonight,” donated 400-plus artifacts to the Alamo, with a legal caveat that a “permanent museum and visitor center” be in a “schematic phase of build out” by October 2021. All items in the $15.5 million collection would be publicly exhibited as the Phil Collins Texana Collection.

But former Land Commissioner Jerry Patterson, Bush’s predecessor, who attempted to win his seat back in 2018 and lost in the Republican primary, opposes moving the Cenotaph.

Patterson says it should, by principle, remain within the geographic “footprint” of the Alamo mission-fort, especially because the Alamo plan envisions guardrails around that portion of the plaza that would help protect the memorial from vandalism.

Cindy Gaskill, a descendant of Alamo defender Andrew Kent, created a website, spiritofsacrifice.com, on the Cenotaph. She believes it has its own significance and belongs “in the center of the battlefield,” as artist Coppini and officials overseeing its placement had desired.

“This is an integral part of the Cenotaph history which should not be ignored,” Gaskill said.

On ExpressNews.com: Alamo church reopens to visitors with timed-ticket process

“Douglass McDonald did say on several occasions if the Cenotaph is not moved, the entire plan would fail. Why? Why can’t Texans have a compromise? The museum could absolutely go ahead as planned. I do think a museum is very much needed to display the vast collection of relics that belong to the DRT and the GLO,” Gaskill said, referring to the Daughters of the Republic of Texas and the Texas General Land Office.

Filmmaker Gary Foreman, an advocate for changes at the Alamo, appears in a new eight-minute YouTube video posted on social media: “Supporting the Alamo Plan: It’s Time to Move the Cenotaph.”

He argues that the short-distance relocation keeps the monument “on the Alamo battlefield” while freeing up space in the historic plaza to function as an outdoor museum. He said the issue has been clouded by folk legend that many Texian and Tejano defenders died on the spot where the monument stands. Historians have said many were killed fighting in the Long Barrack or were dispatched by Mexican cavalry troops as they fled south in the early morning battle of March 6, 1836.

Because the Alamo church was declared the state’s battle shrine in 1905, the Cenotaph, built for the 1936 Texas centennial, is a redundant “monument to a monument,” Foreman said.

In the video, he and military historian Alan Huffines traced the idea of moving the 56-foot-tall monument back to the 1970s. But they said the current proposal is the most respectful treatment ever envisioned for the Cenotaph.

“It’ll finally be a complete and well-interpreted memorial and will be just as sanctified as it is in any other place,” Huffines said.

The Alamo Endowment unleashed a new weapon last month in its arsenal to win support for the plan: new renderings that show what the plaza someday could look like, with temporary replications or full reconstructions of 1836 features that no longer exist.

Illustrations posted on the Alamo Facebook page have shown representations of a second story on the Long Barrack; wooden palisades by the church where David Crockett and his Tennessee volunteers kept watch; the Low Barracks and main gate on the south wall; the Losoya House and southwest corner cannon battery, where the fort’s largest gun was fired; and the Treviño House, headquarters of Alamo commander William Barret Travis — now the location of Ripley’s Haunted Adventure.

Yet the plan has not won the support of two major, long-running heritage groups: the Conservation Society of San Antonio and the Daughters of the Republic of Texas.

The conservation society, which led a nine-year effort to secure the 2015 designation of the five San Antonio missions as a UNESCO World Heritage Site, has been fighting for preservation of the facade of the 1921 Woolworth Building. The building is one of three state-owned historic structures that would be at least partially demolished or incorporated into the new museum.

The Woolworth Building and 1912 Hotel Gibbs directly across from it on Houston Street housed two of seven downtown lunch counters that voluntarily desegregated in 1960, putting San Antonio briefly in a national spotlight when a refusal to serve Black customers was at the forefront of the civil rights movement.

The museum design, not yet released, is one of several parts of the plan that critics say are missing before full support can be accorded to the project.

On ExpressNews.com: Alamo looks for new leader as CEO opts not to renew contract

Patti Zaiontz, conservation society president, said the new renderings reveal nothing about the new museum but generate other concerns about reconstruction of 1836 features. Under UNESCO standards, reconstruction efforts are “justifiable only in exceptional circumstances” and must be based on “complete and detailed documentation and to no extent on conjecture.”

”We seek reassurance that any decision to undertake reconstruction will meet this high standard in order to maintain the site’s World Heritage status,” Zaiontz said.

She suggested the Alamo use digital tools such as augmented reality to “reconstruct historic elements without physically altering an existing site.”

“The 21st-century tourist expects to be able to participate in the re-creation of historic events through such tools, which are more cost-effective than construction and can be updated with new information at any time,” Zaiontz said.

The society also shares the concerns of the Tap Pilam Coahuiltecan Nation and other lineage groups about “the location and designation of cemeteries within the plaza,” Zaiontz said.

The Alamo has formed an advisory panel composed of Native Americans from federally recognized tribes to give guidance on the handling of human bones, including at least four partially intact sets of remains recently found in the church, which in June was declared a “verified cemetery” by the historical commission.

McDonald, the Alamo CEO whose contract expires Sept. 30, has said it’s unlikely human remains will be found in the plaza makeover.

But THC Commissioner Jim Bruseth, an Austin archaeologist, has said the state agency soon could be revisiting the issue of a cemetery at the Alamo, outside the church, “as work for the Alamo overall project continues.”

Tap Pilam has a federal lawsuit pending against McDonald and Bush, seeking to be included in decisions regarding the treatment of human remains.

Meanwhile, the DRT, the Alamo’s custodian from 1905 to 2011, is staying neutral on the Alamo plan and Cenotaph relocation.

Starting with the actions in 1903 of Clara Driscoll and Adina De Zavala to save the Long Barrack from a hotel development, the Daughters are recognized for rescuing what remains today of the Alamo, transforming its ruins into the state’s most visited historic site, seen by 1.6 million people annually.

“While many of us now support the Alamo plan, believing in totality it is a step forward for telling the history of the Alamo, there are also some members of the DRT who strongly oppose the Alamo plan and in particular the relocation of the Alamo Cenotaph,” Raney said.